Heart of the City Speakers Series

The “Heart of the City Speakers Series” provides a forum for exploring ideas that matter to the people who live and work in Toronto. We seek to engage our neighbours through meaningful discussions relating to community, ethics, morality and spirituality. 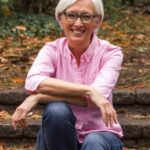 On October 27, 2021, our first in-person Heart of the City Speakers Series event since 2019 took place here at St. Andrew’s.  Helena Moncrieff spoke with us about her book “The Fruitful City – Building Community in the Urban Food Forest”

Helena guided us through Canada’s urban orchards and examined our relationship with food through the fruit trees that dot city streets and yards. In her book The Fruitful City: The Enduring Power of the Urban Food Forest, Helena tracks down the origins of these living heirlooms, and asks how they went from being subsistence staples to deer fodder. She explores the surge of non-profit urban harvest organizations trying to prevent that bounty from rotting on concrete.

Helena Moncrieff is a writer, professor, former radio journalist, and lifelong city dweller. Her writing has appeared in Best Health magazine, the Toronto Star, The Globe and Mail and many in-house publications. Her freezer is full of fruit collected from other peoples’ backyards.

The Fruitful City won the Heritage Toronto Book Award and was shortlisted for a Rakuten Kobo Emerging Writer Prize.

This event is now available Here

“The Heart of the City Speaker Series”

Toronto After COVID – A Conversation with David Crombie

DAVID CROMBIE – Few public figures have known the city better. Three-times elected Toronto’s “Tiny, Perfect Mayor” (1972-79), later an MP and Cabinet minister, Crombie’s influence on City life spans six decades – from his urban reform activism in the Sixties to his struggles today to ensure socially responsible management of the Waterfront, our Greenbelt, and our Post-Covid revival.

Ron Deibert discussed “Cyber Insecurity” and how targeted espionage against civil society is a new threat to us all.

Janice Stein spoke about: “Rebordering the World” and how the frontier of global competition is no longer trade or investment but rather technology.

Please note: These ticketed events take place in the Great Hall of St. Andrew’s and after the talks we offer a chance to share a glass of wine, enjoy some refreshments and to speak with the guests and fellow participants – so please plan to join us.