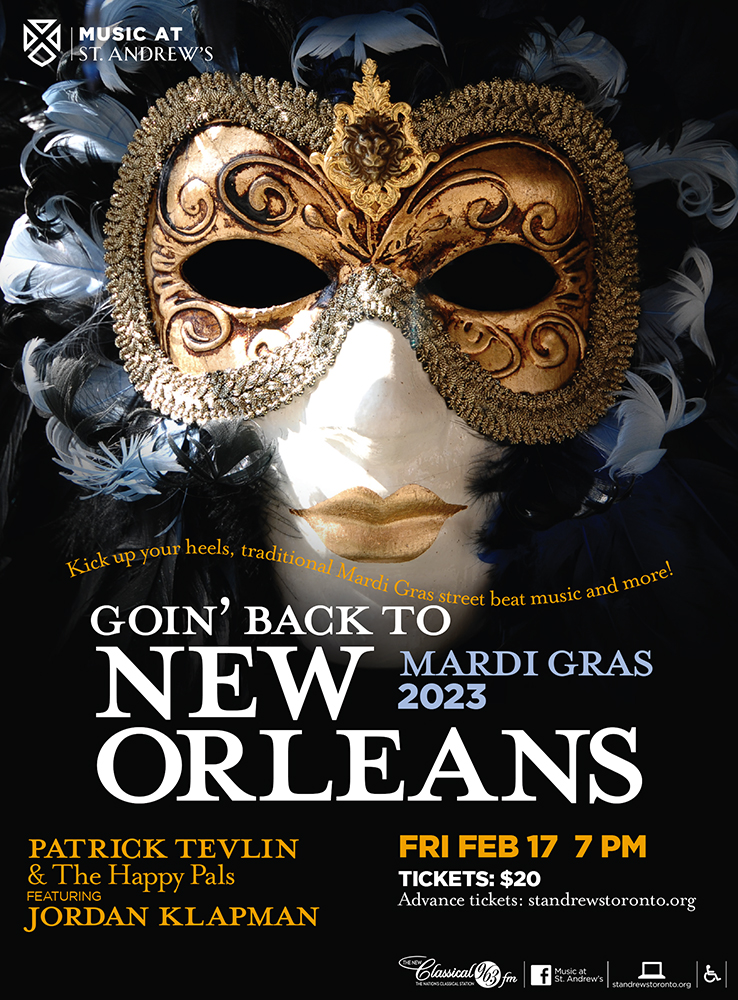 Audience participation is welcome tonight! Join the traditional parades (beads provided at the door). Sing along or dance to classic songs such as Jambalaya, Down by the Riverside and When the Saints Go Marching In. 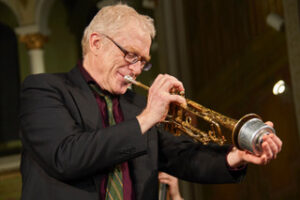 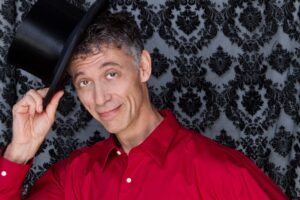 All recitals run from 12:10 – 1:00 pm.  Admission is free, with opportunity for voluntary contributions.

About Music at St. Andrew’s

Music at St. Andrew’s is a community outreach program of historic St. Andrew’s Church in downtown Toronto. We present top flight, affordably priced (and free) concerts and multimedia events. Our music program was inspired by the church’s 2011 purchase of a Bösendorfer Imperial grand piano, which we share with the greater community. The magnificent piano has been used extensively in our free, mostly classical Friday Noontime Recitals, launched in 2013.

Our thanks to the New Classical 96.3 FM for their promotional support of this and other Music at St. Andrew’s events. 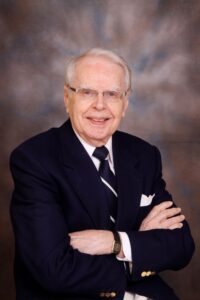 One of Canada’s most influential musicians and teachers, George Talbot Douglas Bodle, LRSM, ACCO, AAGO, died peacefully in Toronto on May 21, 2022. Born in Winnipeg in 1923, he fell in love with the sound of the organ at the age of five. His teachers included pianist Gwendda Davies, organist Hugh Bancroft, composer Bernard Naylor, and harpsichordist Greta Kraus. In the 1950s, he moved to Toronto, where he enjoyed a long and distinguished career as a teacher and performer.

Douglas Bodle gave organ and harpsichord recitals in major cities across Canada, Europe, and the eastern USA. As one of our country’s leading keyboard and continuo players, he recorded and performed with countless Canadian and international soloists under the auspices of The Toronto Mendelssohn Choir, the Festival Singers, and others, and as orchestral pianist with the Toronto Symphony and the CBC Symphony Orchestra. He also recorded the keyboard parts on three Classical Kids recordings, two of which (“Beethoven Lives Upstairs” and “Mozart’s Magic Fantasy”) won Juno Awards.

In 1968, Douglas joined the Faculty of Music at the University of Toronto, where for nearly 40 years, he inspired piano, organ, harpsichord, vocal, and oratorio students who are now leading musicians and teachers across Canada. From 1969 to 1993, he was organist and choirmaster at Holy Blossom Temple. As music director and organist at St. Andrew’s Church in Toronto for 41 years beginning in 1963, he made outstanding contributions to liturgical music and the standards of church musicianship in Canada before retiring in 2006 at the age of 83.

Douglas Bodle’s commitment to the practice of music making, to finding new inspiration, and to learning was central to his life. This was his joy and his discipline, and all who were lucky enough to work with him will carry this legacy forward.

For many years, Douglas had a slip of paper taped above the organ keyboard at St. Andrew’s Church. It read simply: “Make every note beautiful.”

Douglas lived a fulfilled life pursuing the two areas he felt most passionate about: his music, and teaching his students, whom he called his “spiritual children.” So many of his students kept in touch with him and brought him tremendous joy in his later years.

He is survived by his nieces and nephews and their families. Douglas was interred with his parents and sister at the Elmwood Cemetery in Winnipeg.

A celebration of his life and music will be held at St. Andrew’s Church, 73 Simcoe Street, Toronto, on Friday, December 16 at 3:30 p.m.

If desired, contributions in remembrance of Douglas may be made to St. Andrew’s Church  (Music), The University of Toronto Faculty of Music Douglas Bodle – St. Andrew’s Award, or The Baycrest Foundation.